A power barrage gave the Knights enough run support to withstand the late-inning RailRiders rally to win, 7-5. The Knights hit four home runs tonight, including three that helped them get out to a 6-1 lead. Seby Zavala started the power surge with a solo homer in the second. Luis Robert, who had been slumping (for him) at the plate, crushed a solo homer in the third. Zack Collins hit another bomb in the sixth that finally pushed the Knights that 6-1 lead. Meanwhile, the pitching obviously had to be pretty good. Justin Nicolino cruised through six innings with just one earned run and four hits allowed. The seventh inning give him some trouble, as Nicolino allowed three runs in the inning off of two home runs — yeah, it was a home run kind of night. Thanks to Matt Foster, who earned the save in the ninth, and Daniel Palka, who added the last run for the Knights via a homer, the win was sealed.

A long pitchers’ duel finally fell Birmingham’s way in a late, 2-1 win. John Parke was outstanding, throwing seven shutout innings and took a perfect game into the seventh inning. Parke allowed one hit, but the most amazing part of his performance was the fact he only had two punch outs. Instead, he relied on 18 outs in play — and when that many balls go into play, there will probably be a few errors. The Barons had two errors during the game, one that was costly.

Birmingham had nine hits, including three extra-base hits. They just weren’t able to string any together until the eighth, when Laz Rivera drove in Luis Basabe for the first run of the game. Codi Heuer took over for Parke after one batter faced (reaching on an error by Ti’Quan Forbes). Now, that error came around to score, but since it was an error, the run was unearned. On top of that, since Heuer was on the mound when the run scored, he was credited with a blown save without any run being tied to him, or that run even being earned. Baseball has some weird scoring. In the ninth, Forbes made up for that error when he drove in the game-winning run with a double ,and this time, Heuer didn’t let anyone get home, earning the win.

Another close win for the Sox organization! This time, it was the Dash coming back late to take and hold the lead. Konnor Pilkington started the game and threw a lot of pitches. After getting just 12 outs, he already had 88 pitches and was pulled. I mean, it’s the end of the season, there’s no reason to push it, but Pilkington was doing all that bad. In four innings he only allowed one run, and had five strikeouts. However, by the end of the fifth, the Dash were down by one. Then a four-run sixth gave the Dash a lead they held until the end. Mitch Roman drove in the tying run to score Tyler Frost (who homered earlier in the game). Johan Cruz cleared the bases later, giving the dash a 5-2 lead. Though it got a little too close in the sixth, the bullpen was able to hold on for the last three innings thanks to Jacob Lindgren and Will Kincanon.

The I’s got lucky to start, but very unlucky the rest of the way. In the first inning, Kannapolis scored two runs because of a fielding error. Tyler Osik doubled home those two runs, but that was really it for the I’s in terms of offense. For the rest of the game, they only tallied two more hits and no runs. Meanwhile, Jason Bilous did not have his best outing. He looked fine through the first two frames, but the third was trouble. He allowed three runs, including a homer, and was pulled after the inning. But the damage was done. The offense couldn’t get anything going, even with stellar performances out of the I’s pen, in the 4-2 loss.

The Voyagers win a game that only saw one run cross that plate. That lone run came in the fourth inning off of a sacrifice from Luis Curbelo that scored Caberea Weaver. That was all the GFV pitching needed. Chase Solesky started the game with four innings. Though he allowed the most hits of the Voyagers pitchers, he struck out five in what was his best outing of the year. Nate Pawelczyk and Karan Patel went the next four innings and only allowed one hit. Caleb Freeman came out for the ninth to close and struck out all three batters for his first save in the Pioneer League.

The AZL Sox had the lead for much of the game, but the bullpen gave up the lead late. Yoelvin Silven had a fantastic start, which is why the Sox were in control for most of the game. He went six shutout innings and didn’t walk a single batter. He even struck out nine to lower his ERA to 2.25 in what was just his second start of the season (14th overall appearance). The offense gave Silven the lead in the first inning with a Bryan Ramos RBI single. However, once Silven left with the meager 1-0 lead, it quickly fell apart. The Padres scored a run in the last three innings of the game and took the lead twice in the process, in what was a bumpy game for the pen.

A back-and-forth game till the very end, but the DSL Sox come up with the loss. There were two big sticks for the Sox and they were Johnabiell Laureano and Ruben Benavides. Laureano had the most hits on the day with three, but Benavides brought the power. He hit his third home run of the year, a three-run shot that gave the Sox a brief lead. Alberto Bernal also added a home run of his own to tie the game, but the Sox pitching came up short. Carlos Mola started the game, and really did not do well. He allowed three runs, thanks to two home runs allowed. Though the bullpen was better overall, Edgar Navarro blew the save in the ninth as he allowed the tying and walk-off runs. For the notables, Benyamin Bailey was in the lineup but was mostly a non-factor with just one walk. Elijah Tatís had another 0-fer day today. 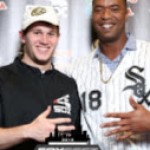 Just checking to see if it works

Good to see Robert out of his “slump”.

For various reasons, am following Patel hopefully. Nice to see another solid performance from the kid.

I remember reading that Yolbert Sanchez’s bat was behind his glove but at 22 and with his experience playing in the Cuban leagues, his struggles with 16 to 20 year olds in the DSL are a little alarming, no?

I don’t think so I usually wait for actual baseball to judge guys playing the DSL. I mean, it’s great to see how Guzman and Bailey among others are doing there, but I can’t make a judgement yet, good or bad.

AJ Reed outright. And the corresponding move is…?