It only seemed like 22 minutes plus commercials: Detwiler turned in an Emmy-worthy performance tonight. (@WhiteSox)

(This recap was written after this author’s dinner with his mother-in-law, and is gleamed from various Twitter clips and box scores; it will be written in the style of a scene from Everybody Loves Raymond, featuring one if the greatest sitcom in-laws of all time, Marie Barrone [played by the late Doris Roberts] and her put-upon daughter-in-law, Debra).

(Raymond and Debra are on the couch, watching the end of the Chicago White Sox and Texas Rangers game on their TV. The game has just ended.)

RAYMOND: (gets up, stretches and yawns sleepily) Oh wow, glad that’s finally over … I still don’t get why a New York paper asked me, a native Long Islander, to watch and recap this random Sox and Rangers game, but a job’s a job!

(Leans down to kiss a glowering Debra on the forehead)

RAYMOND: Thanks for staying up with me to watch … even though it’s our wedding anniversary … it’s the only thing I could come up with to enjoy together …

(Debra shoots him a look of burning annoyance)

RAYMOND: Ooooook … I’ll be upstairs writing this up and … (Raymond awkwardly bounds up the stairs)

(Debra rolls her eyes and reaches for the remote to turn off the TV when suddenly the front door flies open and Ray’s mother Marie bursts into the room.)

DEBRA: Yeah, Ray just went upstairs to work on it …

MARIE: Oh, thank you dear … but looking at the circles under your eyes … maybe you should … (looks at TV, Jason Benetti is watching Steve Stone talk about house building again) Oh my god! Is that Steve?

MARIE: Steve Stone! Oh Debra, I forget … you don’t take much interest in my Ray’s line of work .. He was a pitcher in the 70s … one time, the Baltimore Orioles were in town and I bumped into Steve at a store downtown … Debra, if I wasn’t married … [audience hoots and hollers]

DEBRA: That’s wonderful, Marie … but … (Debra goes to turn off the TV)

MARIE: Don’t you dare! Leave it on … (Steve is watching Jason explain tonight’s #SoxMath answer, cutting his eyes to the camera periodically, Marie feels as if he is directly looking at her)

Um … Debra dear, why don’t you … um … be a dear and describe the game to me … what happened in the game? I’m going to get Robert to get on the Tweet machine tomorrow and I want to reach out to Mr. Stone here and I want to sound like I actually care about caseball …

DEBRA: [Debra sighs and debates how fast she can escape to Canada after strangling Marie, decides against it] OK, Marie … ummmm so the game starts … the first Sox pitcher … Ross Det … Rot … wiler? Whatever he starts out really well … he even strikes out all three Rangers in the second inning.

MARIE: Yes, yes … keep going! And punch it up a little!

DEBRA: Right … evidently he hasn’t been doing well in many of his games before, but you couldn’t tell tonight I guess! He went a whole six innings, got eight strikeouts, and only gave up a home runner to um … a guy named … Elvis?

MARIE: Honey, you don’t have to make up names, if you don’t remember … OK, what else??

DEBRA: The Sox had this young man, the announcer called him Yo-Yo, oh he just swatted one a pitch straight out of the park! Well, not literally, but it was fast! Then the Sox catcher, the guy who squats all the time? His name is James McCann and he hit another homer right after the Yo-Yo guy did!

MARIE: Yo-Yos and Irish catchers, got it. Is there anything else?!

DEBRA: Well they kept cutting to this guy in the stands, he had big ears … I think his name was Chuck …he just went on and on about …

(Debra’s voice fades into the background as Marie stares deeply into the visage of Steve Stone, her vision turns hazy and this picture slowly fades in on the screen:

DEBRA: Marie? (Snaps fingers) Marie, are you even listening?!

MARIE: (slowly emerging from a her haze) What? Oh my, I’m so sorry dear … what was it you were saying?

DEBRA: I’ve been trying to tell you! Some guy …I think his name was Kelvin Herrera … he came in the ninth inning and got the final three outs. The Sox ended up winning 6-1! So there! Is that enough for you?! Can I go to bed now?!?!

MARIE: Yes, yes … of course! Thank you so much! Now be a dear and don’t tell Frank or Ray any of this! And please try to keep your anniversary lovemaking noises down to a minimum …Last year I had to tell Frank some raccoons were fighting out by the garbage! (Marie chuckles …) Good night!

Tune in tomorrow night! Special guest star Ricky Renteria stops by to say hello to his old teammate, who happens to be Ray’s dad! But when Frank claims the bunt is a waste of an at bat, fists start flying! How will emergency coach Ray Barrone manage young Dylan Cease against the Rangers’ Lance Lynn at 7:10 p.m. Central on the South Side of Chicago without Debra noticing?! 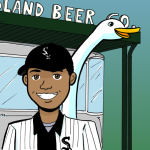 Guest
David Duckworth
Offline
#367
You can flag a comment by clicking its flag icon. Website admin will know that you reported it. Admins may or may not choose to remove the comment or block the author. And please don't worry, your report will be anonymous.

I love this-funny and clever. More recaps like this would be great, nicely done!

Author
Active Member
Lenny G
Offline
#368
You can flag a comment by clicking its flag icon. Website admin will know that you reported it. Admins may or may not choose to remove the comment or block the author. And please don't worry, your report will be anonymous.

So glad you enjoyed it! Some games call for that Serious. Writing. Style. Since the Sox don’t have many of these kinds of games left, we need something different every once in a while!

Guest
Pointerbabe
Offline
#373
You can flag a comment by clicking its flag icon. Website admin will know that you reported it. Admins may or may not choose to remove the comment or block the author. And please don't worry, your report will be anonymous.

Thanks for this! It made my otherwise crappy morning

Guest
Lenny G
Offline
#374
You can flag a comment by clicking its flag icon. Website admin will know that you reported it. Admins may or may not choose to remove the comment or block the author. And please don't worry, your report will be anonymous.

Anytime! If this Sox writing doesn’t pan out, I at least have ELR Fan Fiction to fall back on!