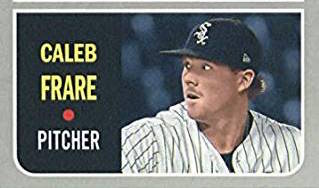 The White Sox secured their backup catcher, but lost three valuable bullpen arms in a rough tender day on Monday.

The top headline today came first, as the White Sox announced they had reached an agreement with arbitration-eligible catcher James McCann on a $5.4 million deal for 2020. The now-backup backstop more than doubled his 2019 salary, perhaps fair even in light of his diminished role post-Grandal, as McCann was an All-Star and one of the few bright lights on offense last year.

Also this afternoon, Thyago Vieira was released from the 40-man roster in order to sign a contract to pitch for the NPB’s Yomiuri Giants.

Then, things got interesting.

Bullpen mainstay in 2018 Caleb Frare and TJS rehabbing bright light in the 2019 pen Ryan Burr both were refused contracts by the White Sox. This removes them from the 40-man roster. While there’s a chance Burr, injured, will re-sign on the South Side, the likelihood that Frare won’t receive significant interest around the league is almost nil.

Yolmer Sánchez, already DFA’d last week, did not receive a contract offer from the White Sox, either.

The losses of Vieira, Burr and Frare reduce the 40-man roster to 36, which fuels speculation for a move — or a series of moves — this week.

Four players were offered contracts, putting them on track for arbitration hearings next year to determine final salaries (MLBTR arbitration estimates in parenthesis):

Losing Frare reduces the number of MLB-ready bullpen southpaws to just Aaron Bummer and Jace Fry, so surely something must be cooking in Rick Hahn’s kitchen. With free agent bullpen lefty options already reduced to almost nil, perhaps there is a crafty Rule 5 or DFA snag Hahn has in mind, if not a trade.

As our James Fox pointed out, all three of these pitchers being cut on the same day signals a strikeout for the Sox system, even if all three players were lottery tickets:

The #WhiteSox traded $3 million in international bonus pool space for Ryan Burr, Caleb Frare and Thyago Vieira. They were all released from the 40-man today. That money couldn't be spent and the deals were fine at the time but that's not a great use of resources in hindsight.