In 1939, a Class D (there was such a thing then) shortstop for the Fostoria (Ohio) Redbirds, in the St. Louis Cardinals system, hurt his shoulder and, as a non-prospect anyway, retired after a two-year career. His last act in professional baseball, he assumed, was convincing the St. Louis Browns to sign his more talented brother, Johnny. Johnny went on to play six years in the majors, missing four in the middle with World War II service.

Johnny Lucadello was never a star, or even a regular outside of 1947 (career: 1.0 bWAR), but his career was the beginning of Tony Lucadello’s true calling. By the time he died in 1989, Lucadello, the less-good-at-playing-baseball, was considered by most to be the greatest baseball scout of all time. Prophet of the Sandlots is the story of what turned out to be the last year of his life.

Starting from his first full-time, professional job scouting for the Cubs in 1942 (where Phil Wrigley, after watching two Lucadello-found prospects pitch, announced that “This young man was born to be a scout,” Lucadello signed 52 future major league players to the Cubs and later, the Phillies. That becomes 53 if you count Ernie Banks, who certainly counted himself as a Lucadello signing. (Lucadello didn’t consider him a signing since he was already playing professionally in the Negro Leagues when he brought Banks to the Cubs.) These numbers include two Hall of Famers (Mike Schmidt and Ferguson Jenkins … and three, if you count Banks, who counts himself), and 10 All-Stars (11, if, you know …). *see bottom*

Lucadello achieved this astonishing success by working and traveling tirelessly, creating a vast and intricate network of part-timers, high school and small-college coaches, and other assorted bird-dogs who kept their eyes open and passed along the names of promising young players. And perhaps most importantly, he created and nurtured personal relationships with virtually everyone he met along the way.

Prophet of the Sandlots takes us inside the work, travel, network, and perhaps most importantly, relationships. Writer Mark Winegardner, at the time the author of one book that hadn’t yet been published, convinced Lucadello to allow him to travel along with him during the 1987-88 scouting season. Lucadello, dubious that anyone should be remotely interested in him or his life, reluctantly agreed.

What follows is a portrait of what was even then a dying breed. Lucadello was an anomaly among scouts. He never used a stopwatch or radar gun. He didn’t position himself behind the plate, but rather roamed throughout the ballpark (such that some were), observing from different angles, looking for different signs in each spot. The other scouts considered him a legend, but an oddball.

Part of what made him such an oddball was his overwhelming love and concern for the game. Lucadello was not just a scout, but an apostle for baseball, ever concerned and fretting about the game’s future as more and more kids filled their time with other sports, devoting only limited time to the one, true sport of baseball. He makes the now-common observation that players today (the late 1980s at the time) are better athletes than before, but lesser ballplayers, lacking in fundamentals and technique.

To that end, Lucadello was also an apostle for what he simply called “the wall,” a concrete surface approximately six feet tall and four feet wide, with a slight pitch at the base. Spending an hour a day standing a bit back from it, throwing the ball at it and fielding the resulting bounce-back would, he was convinced, immediately begin to improve a young player’s throwing, footwork, and fielding. And he wasn’t alone. A running theme throughout the book is a succession of walls in backyards, schoolyards, and practice fields all across Ohio, Indiana, and Michigan — Lucadello’s scouting territory for the Phillies.

That personal connection exemplifies how the old scout went about his work and offers insight into his success. Scouting a possible prospect was only the beginning. The contact was the work, with Lucadello writing monthly, even weekly letters to players, their families, and coaches. Even once signed, he kept in steady contact with them, insisting that they call him, collect, if they needed anything once in pro ball, and routinely got calls from slumping, frustrated, and even plain-old homesick young ball players. At one stop in his circuit, he stops off to visit briefly with the parents of Mike Schmidt, All-Star, assured Hall-of-Famer, at the time considering retirement. His parents, even at this point in their son’s career, effuse over Lucadello, with whom they’d stayed in touch all the while, years after any official or professional need to do so.

Lucadello estimated that he drove around 40,000 miles a year, watching hundreds of ball games in small college stadiums, high school grandstands, sandlots, and empty fields – wherever the possibility of seeing a potential prospect might lead him. He avoided other scouts as much as possible, always leaving before the end of the game, when he could get away without having to share his thoughts about a player if he could. Loathe to hurt anyone’s feelings, he knew that there were a lot more not prospects (marked with an “NP” in his notes) than actual prospects (“P”). He didn’t want to be the one to tell proud, hopeful kids, or their parents, that they didn’t have a future in the game.

He also didn’t like sharing his “sleepers” with other scouts, and would go to great lengths at times (including hiding under the bleachers, or behind concession stands, even working out little-scouted players at night, in secret) to avoid tipping off the competition. Such was his skill and rep that simply knowing Lucadello was watching a prospect would create interest form other scouts.

It goes without saying that Lucadello considered himself a projector, and he spends a lot of time explaining what he sees in a player and how it will manifest down the road.

All of this would be interesting, but what makes it compelling is Winegardner’s skill. He avoids the temptation to romanticize the scout and his solitary, nomadic lifestyle, instead taking a documentary approach. Winegardner becomes part of the story, of course, part confidante, part acolyte, part sounding board, but he never intrudes upon it. At no point does it become about him. Instead, he lets Lucadello tell his own story, whether his early days as a scout for the Cubs, his funny confabulations about bizarre plays he claims to have witnessed, or most often, expounding about how to make baseball better, to save it from the clutches of other sports and sloppy play. The little scout loved baseball more than anything else, even, ultimately, his wife.

And that’s what ultimately makes the book a bittersweet pleasure. Winegardner obviously couldn’t know that he was chronicling the last year of Lucadello’s career. And Lucadello’s job was his life.

Spoiler Alert. Seriously. Unless you already know his story, then not so much.

Ever since the draft was instituted in 1965, the role of scouts slowly changed. Men like Tony Lucadello’s role became increasingly marginalized as they both lost the ability to simply find and sign prospects, and their reports became scrutiny of team scouting bureaus. These bureaus then took their scouts reports and made recommendations and decisions for the draft. Sometimes they took Lucadello’s advice, more often they did not. Eventually, he began to feel increasingly like an afterthought, but his love of the job kept him driving the backroads of the Midwest, taking in games, finding prospects, and making connections.

But the marginalization became complete in the spring of 1989. The Phillies told him they would no longer require his services after the upcoming draft. On May 8, Lucadello typed out his final prospect reports in triplicate, left home to drop them in the mail to Philadelphia, drove to the site of the local ball field, where he had played professionally all those years ago, and shot himself in the head. The ball field, in his adopted home of Fostoria, Ohio, refurbished and renovated, is now known as Lucadello Field. A marker identifies its namesake as “Baseball’s Friend.”

Prophet of the Sandlots is a wonderful book. I fear I’ve not really done it justice here, but it’s a joy to read and despite its ending, it’s an uplifting story of a singular man who loved and made his mark on baseball in a way that most of us don’t think much about. Highly recommended.

Lucadello’s wall has been widely adopted by amateur baseball teams and organizations. The Lucadello Plan, for its proper use, consists of six steps:

For more on the man and his wall, read the Wall of Dreams.

*Just for jollies, I went into Baseball Reference to add up the total career bWAR of all of the players Lucadello signed who played in the majors. Total: 462.1 bWAR. 529.6, if you count Ernie Banks. Ernie Banks counted himself; Lucadello didn’t. So I’ll just leave it here.

Liked it? Take a second to support katiesphil on Patreon! 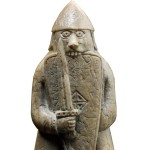 Life-long baseball fan. Followed my beloved Indianapolis Indians since about 1966; saw my first Sox game at Comiskey in '67. Full-time love for them since moving to Chicago in 2002. Not much of a stats guy or analyst; love the game for it's beauty, history, and fun, so I write about that stuff. And I use the Oxford comma.

Amazing post! Will read it because of your piece.

Thanks KP! I just requested it from another library because it sounds great. Full disclosure: I stopped reading about halfway through because I didn’t want to spoil the book, but I’ll come back and read the rest after I’ve read the book. Thanks for the recommendation. Related question / comment for Brett: this was posted today, but I almost missed it because it got buried behind a few of WSM’s prospect articles. The prospect articles are great, but it would be a shame if people missed KP’s post. Is there a way to put all of WSM’s prospect articles in… Read more »

Yeah, it’s tricky. We just adjusted the layout to not have “top stories” then just repeat below (my aim is to have a similar layout to SSS, perhaps even more functional without ads and a better sidebar). There is a risk of stories getting lost on heavier posting days. Certainly a solution is always scrolling down a touch. But I can also be a little more aggressive with pinning bigger stories for a day or so. Of course, the risk then is that a quick glance at the page, seeing the same “big” story pinned, might lead you to think… Read more »

Of possible interest for many of us, a short appreciation of the sadly now late Roger Kahn’s work: https://slate.com/culture/2020/02/roger-kahn-dies-boys-of-summer-appreciation-sportswriting.html

I’ve actually never read the Boys of Summer. That’s going to have to go on the list, too.

It’s quite good though I confess it’s been years and years since I read it.

The Great American Novel by Philip Roth and anything by Duane Decker (Blue Sox). And of course, Ball Four.

As to Ball Four, I genuinely believe Bouton belongs in the HOF: https://www.southsidesox.com/2019/7/12/20691469/jim-bouton-new-york-yankees-seattle-pilots-that-final-ball

That book is a great read. I really enjoyed it along with The Art of Scouting by Art Stewart, and Dollar Sign on the Muscle. If you love the minor leagues and the vision it takes to be a skilled evaluator you will love those books. I always feel like I can see something in a guy, even if I have to squint a little bit to realize it.