The Good Guys managed to pull out a 3-3 tie in the ninth, with a homer from who else but spring training hero Yermín Mercedes.

Dylan Cease showed definite control issues with two walks (one scoring), a home run, and a hit batter, he’s not the only one who had a rough day.

Tim Anderson, despite having a 2020 goal of cutting down on errors, bobbled a very easy grounder for another error. Eloy Jiménez had a dive-and-miss in left. Nick Madrigal made a brief appearance before he took a grounder off of his face; he walked off on his own, though, so I think our most prized draftee lives to fight another day. An inning later, Andrew Romine missed an easy play by trying to flip a slow hop from his glove instead of his bare hand, allowing an infield hit.

So, the defense could have been better. The best part of spring training is that the White Sox can get these kinks worked out now, and they’ll be just fine by regular season (hopefully).

Someone on the diamond was already Opening Day-ready on defense: Yoán Moncada. Our $70 million man had the bright, shining defensive moment with an excellent play at third, as he works towards a spring highlight reel on SportsCenter.

After Cease got pulled, we got another look at the usual bullpen guys of Steve Cishek, Aaron Bummer, Jimmy Codero, and Evan Marshall and Kelvin Herrera, so it’s looking like the Sox are starting to solidify the reliever rotation.

Yasmani Grandal had a double and a homer, so he’s recovering from his “early spring training injury” quite nicely.

Grandal’s homer shortened the Reds lead to 3-2 and Mercedes tied it up in the ninth, but Sox offense never made it past a couple moments of contact to do much more damage. There was a brief moment in the eighth when it looked like the day was going to be saved by a brigade of Guys Off the Bench, but Zack Collins struck out staring so those hopes were dashed. The offense — can somebody, anybody make contact? —definitely needs to get worked out between now and March 26, or else we’re staring down another sad season of strikeouts.

The Reds displayed an excellent use of the shift, which got them some solid outs to back-up Anthony DeSclafani, who pitched well for four innings. Between that and Cincinnati’s solid defensive outfield, they might be a fun team to watch this year — after all, PECOTA picked the Reds to win the Central, so there’s someone new to root for against the Cubs.

Liked it? Take a second to support ColleenS on Patreon! 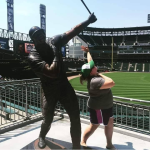