Back on track: Burdi’s solid showing so far this spring puts him back in line for a 2020 or 2021 call-up. (Sean Williams/South Side Hit Pen)

As part of a series of spring roster moves, the White Sox optioned Zack Burdi to Double-A Birmingham on Wednesday. Although Burdi will not break camp with the big club, his impressive spring showing has re-established him as a top arm in the White Sox system.

In four scoreless appearances, Burdi recorded four strikeouts while only allowing two total baserunners. After spending the better part of three years working his way back from multiple injuries, just being back facing hitters had to be a moral victory for the former first-rounder out of the University of Louisville. However, moral victories are not Burdi’s end goal, and he was nice enough to take some time to talk last weekend about his rehab process and some of the mechanical changes he’s made that will hopefully pay off long-term.

I remember watching both Zack and his brother, Nick, a relief pitcher for the Pirates, shutting down overmatched opponents in their days at the University of Louisville. Nick is having an extremely impressive spring as well coming off of severe injury, having allowed just one earned run with with eight strikeouts in 4 ⅔ IP. Both Burdis were regarded as lockdown relief prospects, and both have run into some brutal luck with injuries.

“It’s kind of ironic that we were rehabbing at about the same time both times we have gotten injured,” Burdi told South Side Hit Pen. “[Nick] had Tommy John in May 2017 and I had TJ in July 2017, so we went through rehab together, and then we both had injuries last year also. It has definitely been nice to have someone in a similar situation to lean on while we were rehabbing. It obviously was tough mentally as well as physically, but we just tried to stay positive and believe that long-term, some good would come out of it.”

Hopefully, the arduous rehab process will make success that much sweeter for both of these two (as long as Nick’s doesn’t come against the White Sox).

By the way, Zack and I have a few things in common, background-wise …

This spring, I noticed that Zack’s arm action seemed different from what I remembered. Here are a few videos of his mechanics prior to his injuries:

And here is recent video from spring training 2020:

As you can probably tell, Burdi’s arm swing is a lot shorter, something that Lucas Giolito found success with last year. After realizing this, I was interested in the reasoning behind this change for Burdi, and whether Giolito’s success played a factor in that decision.

“[The mechanical change] started after my injury in 2017,” Burdi says. “After [Tommy John], I talked with many different coaches, and we came to the conclusion that my arm swing was too long. It’s been a continual process since then to shorten my arm action to try and keep [my arm] in a better position so it wouldn’t lag behind the rest of my motion, causing me to have to work to catch up. After Giolito’s similar mechanical change last year and the success he had, I talked with him about the change I was making, and he gave me some of the drills he used to help develop and reinforce his new mechanics. From the feedback I’ve gotten and how I feel so far, it’s a lot cleaner arm action and has helped my timing down the mound.”

To my untrained eye, and from what Giolito said last year, this new arm action should not only help Zack put less stress on his arm, but will also help with command (as it seems more compact and repeatable) and hiding the ball from the hitter a bit more. So far, the results have been promising, despite the small sample. Although Burdi’s velocity has been 95-97 rather than the typical 99-100 mph he was sitting at prior to surgery, he has showcased good movement and command of all his pitches.

As the season ramps up, Burdi should be able to keep gradually increasing towards the century mark in terms of velocity. Either way, he has the stuff to get big outs, and if that happens, Burdi could be an X-factor in a (hopefully) second half pennant push for the South Siders.

p.s. — For my Louisville readers (or if you’re ever visiting the ‘Ville), check out some of me and Zack’s favorite hot spots — you won’t be disappointed!

Liked it? Take a second to support tlines2 on Patreon! 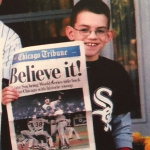